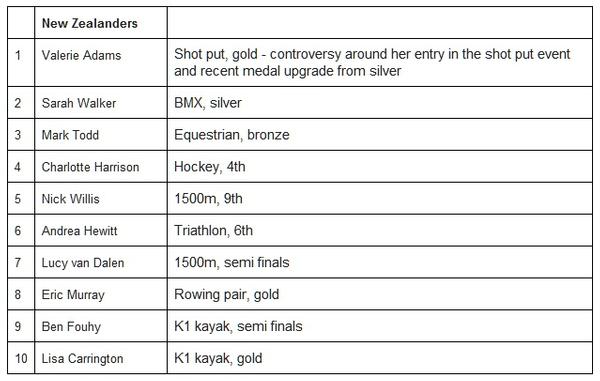 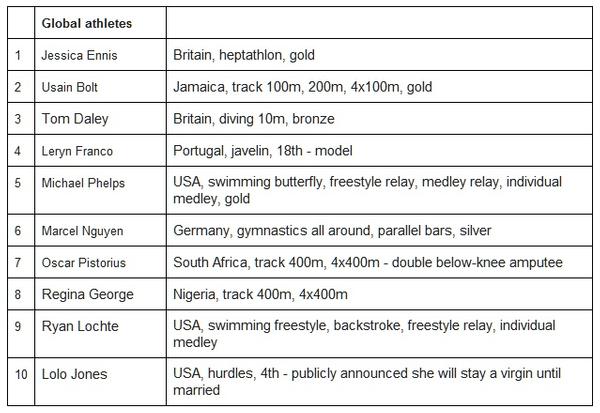 Google has crunched the numbers to bring you the top Olympic athletes that New Zealanders have sought out on the search engine.

As controversy embroils around shot putter Valerie Adams, it is revealed that she has been New Zealand’s most-searched athlete on Google.co.nz.  While last night it was announced that she will take the gold medal from Nadzeya Ostapchuk (who has been disqualified for doping with anabolic steroids), Valerie was also the subject of an embarrassing administrative error by the New Zealand Olympic Committee which nearly saw her watching the competition from the sidelines.

When we take into account global athletes, Kiwis went to Google to find out more about Britain’s gold-medal heptathlete Jessica Ennis and Jamaican sprinting phenomenon Usain Bolt and his three gold medals (100m, 200m, 4x100m). South African 400m runner Oscar Pistorius, who is dubbed the “fastest man with no legs” also made the list.

The fastest-rising queries are the search terms that have seen the largest increase in search volume over a specified amount of time. You can think of these as "shooting star" queries as they rise up the ranks quickly. For these results, Google looked at search terms for the month of August (1/8/12 to 13/8/12 inclusive).

“The fastest-rising athletes on Google show you which athletes Kiwis are curious to find out more about,” says Google Australia and New Zealand’s Johnny Luu. “It’s a good indicator for who has captured our collective curiosities during the Games”.