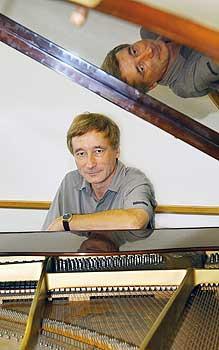 Jazz pianist and NZSM (Albany) Head of Jazz Studies Phil Broadhurst gets ready for The Jazz Concert of the Year 2012 this Sunday. CREDIT: Massey University

Massey University’s Albany campus will be jumping on Sunday at the Jazz Concert of the Year. Fresh from the New School of Music Jazz Festival in Wellington, two highly acclaimed jazz saxophonists – Dick Oatts and Bennie Maupin – will join a stellar cast of local performers to bring their musical magic to life.

Head of Jazz Studies at the New Zealand School of Music (NSZM) on Massey University’s Albany campus and acclaimed jazz pianist Phil Broadhurst is excited by the prospect of sharing the stage with such talented performers. “They are performance legends in their own rights, and over the years they’ve collaborated with some jazz icons,” he says.

Dick Oatts was a member of the Thad Jones-Mel Lewis Orchestra and has accompanied the likes of Sarah Vaughan, Ella Fitzgerald, Mel Torme and Milton Nascimento. He has also recorded solos for Luther Vandross, James Taylor and Everything But the Girl, and is in demand as a soloist and jazz educator throughout the United States.

Bennie Maupin was a founding member of Herbie Hancock’s band The Headhunters, as well as a performer and composer in Hancock’s influential Mwandisi band. Best known for his atmospheric bass clarinet playing on Miles Davis’ “Bitches Brew” album, Mr Maupin has played with groups led by Marion Brown and Chick Corea, as well as playing regularly with Roy Haynes and Horace Silver. In addition to performing and teaching, his eponymous ensemble is also in demand, harking back to the tradition of great saxophone-bass-drum trios.

Also sharing the stage will be the highly acclaimed Auckland Jazz Orchestra and local performers Trudy Lile (flute) and Neil Watson (guitar), who also teach at the School of Music.

Trudy Lile recommends buying tickets early. “For the past two years, the concert has sold out early and we’re expecting this year to be no different,” she says. “People need to get their tickets now or they’ll be disappointed.”

Te Koki, The New Zealand School of Music, is a joint initiative of Massey University and Victoria University and is based at the Albany campus and in Wellington.

To buy tickets go to: http://www.eventfinder.co.nz/2012/jazz-concert-of-the-year-2012/auckland/north-shore