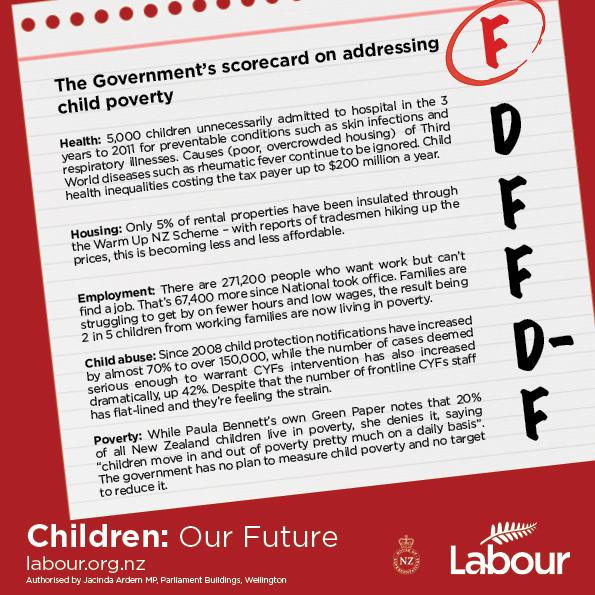 To coincide with the report's release Miss Ardern has today released a report card on the Government's child poverty record. CREDIT: Labour Party

Research that shows parental responsibility and government support are both vital to the well-being of children should be the catalyst that changes Paula Bennett’s thinking on child poverty, Labour’s Social Development spokesperson and Spokesperson for Children Jacinda Ardern says.

“The message in The Netherlands Study, commissioned by Every Child Counts, is clear– that if New Zealand really wants to have the best outcomes for its children, then it has to invest in policies that support children and parents,  and ensure they have the right tools and support.

“All the evidence shows that poor outcomes for kids associated with child poverty cost taxpayers between $6 billion and $8 billion a year.

“New Zealand currently spends around a third less on children each year than Nordic countries. The Netherlands spends less than half, but continues to achieve excellent outcomes.

“Ms Bennett has, so far, refused to admit that 20 per cent of Kiwi kids live in poverty, a fact that’s noted in her own Green Paper on vulnerable children. She believes that because children ‘move in and out of poverty on a daily basis’ we have no way of measuring child poverty and doing so was not a priority.

“Hopefully this study will be the catalyst that changes that thinking. Quite simply, what gets measured, gets done, and we need to know that what we’re doing in this area is making the difference we so desperately need.

‘The report recommends a raft of initiatives – including adopting national, regional and local indicators of child well-being and increased paid parental leave – that Labour has been calling for,  for some time now.

“We would urge Ms Bennett to take the findings into account for her upcoming White Paper on vulnerable children.

“There are savings to be made, and lives to be saved, if she does so,” said Jacinda Ardern..