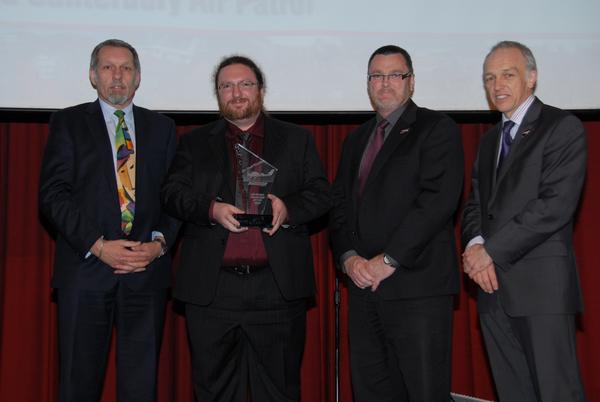 Andrew McGregor from Coastguard Canterbury Air Patrol has received the Air Patrol Volunteer of the Year Award at the National Coastguard Gala Awards Evening, held in Rotorua on Saturday night.

Andrew received one of the five annual national awards given to individuals and Coastguard units whose contributions to the organisation were recognised at the conference, as the Coastguard community came together to honour the year’s achievements.

Andrew was named Air Patrol Volunteer of the Year for demonstrating exemplary leadership skills. He has been credited with turning around the financial fortunes of the unit, largely by thinking outside the square and motivating other team members to do the same in a tough financial climate.

Reinvigorating the unit with his enthusiasm and demonstration of skill, Andrew has enticed a new generation of recruits ensuring the longevity of the unit. He has also become the ‘go to’ person for emergency services when it comes to aerial searches.

Patrick Holmes Coastguard CEO says “Andrew has lead by his own powerful example – not just talking the talk but walking the walk over the last six years. Not only has he led from the boardroom but he has continued to rack up hundreds of volunteer search and rescue hours building upon his extensive technical knowledge. We are fortunate to have volunteers of his calibre.”

Coastguard New Zealand President, Colin Small says, “This year’s award winners have all shown outstanding service to Coastguard and their local boating communities, and our sincere thanks go out to those volunteers for their commitment to saving lives at sea,” says Small.


There are five categories for the awards –

Coastguard South Taranaki, Rescue of the Year
The team cited this as the most challenging operation any of them had ever been involved in. Three fishermen are thankful Coastguard volunteers train to be the best they can be, when they were rescued in February this year from 2 – 3 metre swells which involved a seamless integrated rescue operation bringing into play all elements of their training and involved both land and sea crews.

Nigel Hayton, Operational Volunteer of the Year
Coastguard Taranaki’s Nigel Hayton has been described as the backbone of this tight knit crew. During his impressive 14 year tenure as a Coastguard volunteer, Nigel has been involved in almost every support role and never hesitates to roll up his sleeves if there is a job that needs doing. His current roles include: Unit Training Officer, Unit Safety Officer, Unit Callout Controller, Port Company Liaison, Replacement Vessel Sub Committee and Unit OPSCOM Appointee.