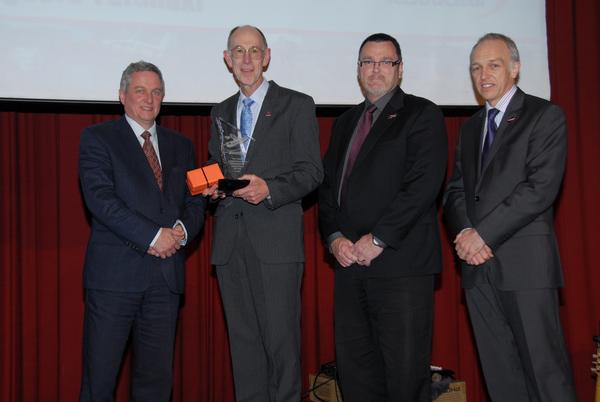 New Plymouth based Coastguard Taranaki volunteer, Nigel Hayton has been named as the Telstraclear Coastguard Operational Volunteer of the Year at the National Coastguard Gala Awards Evening, held in Rotorua on Saturday night.

Nigel received one of the five annual national awards given to individuals and Coastguard units whose contributions to the organisation were recognised at the conference, as the Coastguard community came together to honour the year’s achievements.

Patrick Holmes Coastguard CEO says “Volunteers like Nigel are the backbone of our operation – our water based crews simply couldn’t do their jobs without people like him. It is particularly impressive to see two Taranaki crews go home with significant national awards.”

The award is newly sponsored by TelstraClear and James Smith, Group Manager – Channels at TelstraClear says it was an easy decision for the telecommunications company to sponsor this award.

“This award is very much around leadership and communication which are great fits with the ethos of TelstraClear.  We are proud to be associated with Coastguard and the winner of this award”.

Coastguard South Taranaki, Rescue of the Year
The team cited this as the most challenging operation any of them had ever been involved in. Three fishermen are thankful Coastguard volunteers train to be the best they can be, when they were rescued in February this year from 2 – 3 metre swells which involved a seamless integrated rescue operation bringing into play all elements of their training and involved both land and sea crews.

Andrew McGregor, Air Patrol Volunteer of the Year
Andrew hails from Coastguard Canterbury where he has been involved as a volunteer for six years. He currently holds positions of Air Observer, Ground Controller, Incident Management Team Air Operations, and Board Member. He is being credited for raising morale within his unit and coming up with innovative ways to combat funding challenges in a touch economic climate.
He has also garnered respect from his colleagues for his vast technical knowledge and leadership skills which have seen him inspire many fledgling volunteers.

Tony Lister, Volunteer of the Year
Tony Lister has been involved with Coastguard South Canterbury for over 14 years and it will come as no surprise to his local Coastguard colleagues that he has been acknowledged as Coastguard Volunteer of the Year.
He has become the respected face of Coastguard in the Southern Region working tirelessly behind the scenes to improve and maintain working relationships with local fishermen and other community stakeholders. Since 2000 he has also held the role of Safety Officer/Training Officer which has made him a familiar face at both public and crew training sessions. The dedication of this respected volunteer, both on and off the water has made him a most deserving recipient of the award.