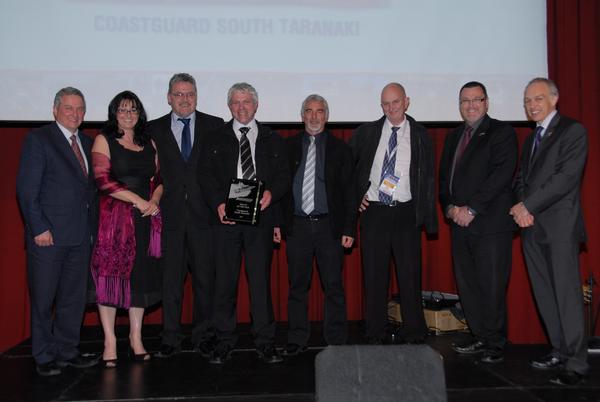 A courageous rescue effort from Coastguard South Taranaki has resulted in the Unit receiving the ‘Rescue of the Year’ Award at the National Coastguard Gala Awards Evening, held in Rotorua on Saturday night.

Coastguard South Taranaki received one of the five annual national awards given to individuals and Coastguard units whose contributions to the organisation were recognised, as the Coastguard community came together to honour the year’s achievements.

On the evening of 22 February volunteers from Coastguard South Taranaki were paged about an incident off the coast.

Three fishermen were stuck in rough conditions with no lights, VHF radio, GPS or indeed lifejackets. Despite 2 – 3 metre swells, the South Taranaki Unit swung into action with an integrated rescue campaign involving both land and sea crew which seasoned team members described as the most challenging rescue operation they had faced in at least 15 years.

Thanks to the expertise and training of Coastguard’s volunteers three fishermen were rescued from the atrocious conditions in a flawless operation. The rescue operation was a true reflection of the high standard of their training and solid teamwork.

Patrick Holmes Coastguard CEO says “Teamwork is what Coastguard is all about and this was demonstrated admirably by the incredible rescue efforts of the Taranaki land and sea crew in what must have been an incredibly challenging situation. It is particularly impressive to see two Taranaki Units go home with national awards.”

Nigel Hayton, Operational Volunteer of the Year
Coastguard Taranaki’s Nigel Hayton has been described as the backbone of this tight knit crew. During his impressive 14 year tenure as a Coastguard volunteer, Nigel has been involved in almost every support role and never hesitates to roll up his sleeves if there is a job that needs doing. His current roles include: Unit Training Officer, Unit Safety Officer, Unit Callout Controller, Port Company Liaison, Replacement Vessel Sub Committee and Unit OPSCOM Appointee.

Andrew McGregor, Air Patrol Volunteer of the Year
Andrew hails from Coastguard Canterbury where he has been involved as a volunteer for six years. He currently holds positions of Air Observer, Ground Controller, Incident Management Team Air Operations, and Board Member. He is being credited for raising morale within his unit and coming up with innovative ways to combat funding challenges in a touch economic climate. He has also garnered respect from his colleagues for his vast technical knowledge and leadership skills which have seen him inspire many fledgling volunteers.