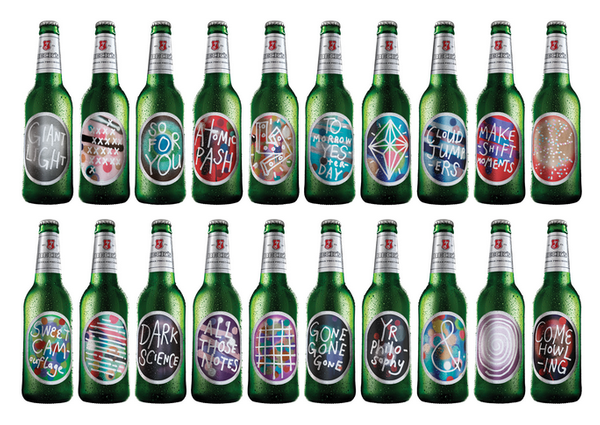 Beck’s is continuing to break convention this spring, by replacing its traditional labels with 24 art labels for its 330ml bottles from one of New Zealand’s most celebrated artists, John Reynolds.

Reynolds has pulled song lyrics from record label Arch Hill’s extensive song catalogue to use as inspiration to create the series of limited edition labels for Beck’s bottles, which will be available in 12-packs and in bars from early October.

Beck’s dedication to art and independent thinking shines through with the latest set of labels inspired by lyrics from songs within the Arch Hill camp.  Lyrics from artists such as Family Cactus, The Clean and Street Chant inspired John to create 24 multi-layered pieces of artwork, which were transformed into the labels.

“I was delighted to be asked by Beck’s to design the latest set of labels.  It’s extremely refreshing to see a brand such as Beck’s embrace and encourage New Zealand artists – both musically and visually. It’s a rare opportunity”, says Reynolds, “and one I’ve savoured every minute of.”

Beck’s has been leading the innovation of beer since 1874, when it was the first brewery to use a green bottle to house the golden lager inside.  Continuing that innovation with the 2012 set of creative labels for New Zealanders, Beck’s have also commissioned John to produce one off art installations in various bars around New Zealand, and two special billboard sites in Auckland and Wellington.  More detail about where to view these installations will be sent out early October.

*You must be 18 years or older to enter

ABOUT BECK’S
Since it’s founding in 1873 Beck’s has been dedicated to innovation and independent thought. In 1987 Beck’s invited artists to provide label designs to replace the brands’ label.  Artists involved over the years have included Gilbert and George, M.I.A., Jeff Koons, Damien Hirst, Yoko Ono, Andy Warhol and dozens of others.  Originated in the UK the initiative spread to over 10 countries including the New Zealand collaboration between artists and musicians earlier in 2012.  The first brewer to protect the beer behind green glass, it was also the first to export beer from Germany in a steel keg, ensuring the beer tasted as fresh when it arrived as when it left the brewery.  Beck’s is instantly recognisable by its crisp fresh palate and slightly bitter aroma and is brewed according to the German Purity law of 1516 that states the only ingredients that may be used in beer are hops, barley, water and yeast.

ABOUT JOHN REYNOLDS
Graduating from the Auckland University School of Fine Arts in 1979, John Reynolds received a Visual Arts Fellowship from the Artscouncil of New Zealand in 1993.  He is a two time Walters Prize finalist (New Zealand’s most prestigious contemporary art prize) and is also an Arts Foundation visual arts laureate.