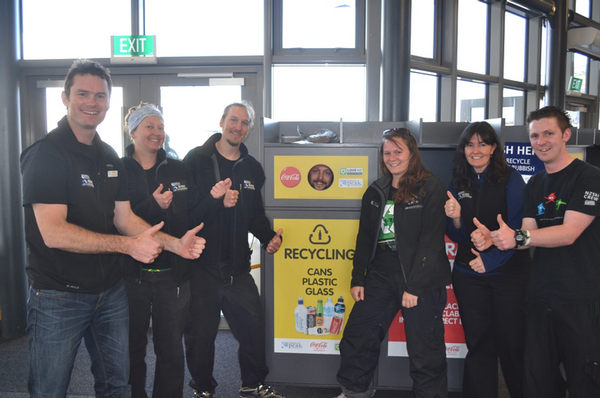 Custodians at Queenstown’s premier ski area are the trail blazers of a waste management initiative that has seen a significant increase in recycling at the mountain.

When a staff survey and staff feedback stated that Coronet Peak ‘wasn’t recycling enough’, it prompted a full review and audit of the ski area’s waste procedures and an overhaul of sustainable practices.

“We took a good hard look at waste efficiencies within the business and it wasn’t long before I realised the staff were absolutely right – we simply could be doing so much more,” said Mr Speedy.

“The audit identified areas where we could make significant improvement in the way we handle and manage our waste and the team has supported the new initiatives ever since.

"This year we got staff buy-in, so the challenge for next year is to educate guests and get them on board if we’re going to reach our new landfill reduction targets".

Mr Speedy set up the Sustainable Action Group (SAG), made up of representatives from each department on the mountain.

“We recognised quickly that there is a lot of work that could be done, but we’ve focused on one module which is improving how we recycle and getting this element right before we move onto the next task,” said Mr Speedy.

The team has also identified areas for improvement in waste handling. A new system of transporting rubbish has been introduced, removing the need for a rubbish truck to make multiple trips per day to and from Coronet Peak and The Remarkables.

“In the past we had delivery trucks coming up fully loaded with supplies every day but going down empty. Now we work with Northern Southland Transport and ‘back load’ the delivery trucks with rubbish.

“Trucks come up with clean empty bins with deliveries and return with full bins, which make perfect sense.”

Mr Speedy said it was critical to the business and to those involved that the new waste management initiatives had positive flow-on effects for the business and it wasn’t just a case of doing it for the sake of it.

“We had to make sure it was a sound business decision, that there would be a return on investment for our company, and show the NZSki board that this investment was worthwhile,” he said.

“I’m delighted to say that at Coronet Peak we’ve reduced operating costs of waste disposal by just over 50% – a significant business saving.”

Mr Speedy said he had also encouraged other suppliers to ‘get on board’ with the initiatives and thanked Coca Cola Amatil and ‘Love NZ’ for their financial contribution to the capital improvements required for the recycling drive.

“We’ve received significant contributions from Coke and Love NZ to install new bin lids and signage at our outlets around the mountain.

“We’re trying to keep it as easy and visual as possible for visitors.  We’ve changed the bin lids so they’re shaped like a bottle and also covered the bin booths in the Coronet Peak Restaurant – it’s all working and all helping.”

Mr Speedy said he had been really impressed with how committed the staff had been to making it work.

”When the bins are being emptied at the end of the day they’re even doing some sorting of their own to ensure the recycling isn’t contaminated in any way.”

All these efforts are part of the sustainability strategy for Coronet Peak, some of which were initiated at sister mountain Mt Hutt and have been introduced at The Remarkables.

After a SAG committee member raised the issue of food and organic waste, Coronet Peak is currently trialing disposing of organic and food waste to a worm farm in Cromwell. They’re currently sending between 400--500kg per week of commercial organic waste by another back-loaded truck rather than see it go straight to landfill.

“Next year we’re aiming to introduce a third bin for organic waste which will make it more efficient for us to deliver to the worm farm. Our napkins, burger boxes and any other paper based products will be able to go in these bins too.

“Our custodians are the enforcers and if they continue to keep everyone on track I’m confident we’ll reach that target.”