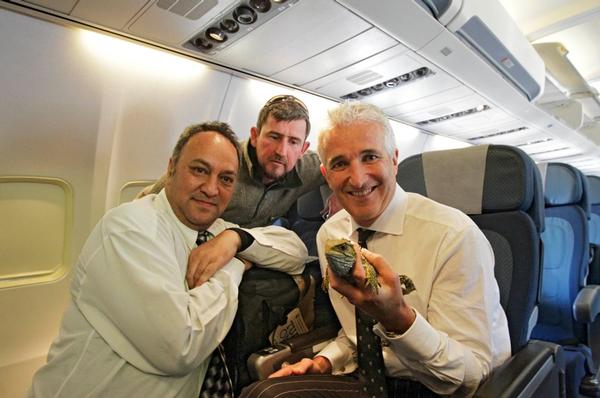 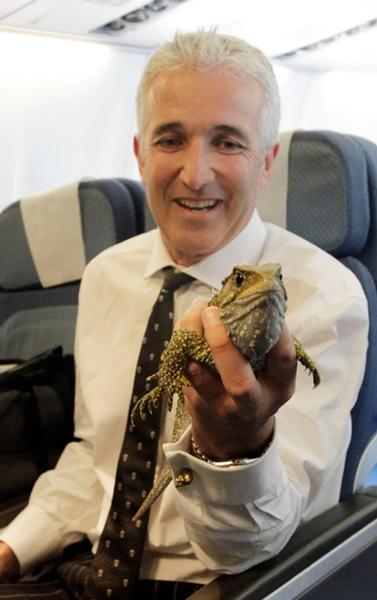 Tuatara take off with Air New Zealand and DOC

Air New Zealand and the Department of Conservation (DOC) today achieved the largest and most complex tuatara relocation ever undertaken.  The 260 tuatara travelled on commercial flights from Wellington to Gisborne, Hamilton and Dunedin.

The tuatara travelled by helicopter from Takapourewa (Stephens Island) in the Marlborough Sounds to Wellington Airport where they were handed over to the care of Air New Zealand cabin crew and the accompanying DOC staff.

The tuatara travel inside the cabin alongside passengers, however, each is housed in its own travelling tube complete with Air New Zealand baggage tag.  In recognition of the airline’s sponsorship relationship with DOC, Air New Zealand Chief Executive Officer Rob Fyfe was on hand to receive the precious passengers and help get them aboard the aircraft.

Air New Zealand and DOC work together on around 200 species translocations around New Zealand each year and Mr Fyfe says assisting relocation efforts is a key part of the airline’s environmental strategy.

“Tuatara are not jetsetters by nature, in fact they don’t generally travel more than about 20 metreers from their burrows over the ewhere they hatch during the entire course of their lives.  We’re very happy to be able to give them the assistance they need return to healthy mainland populations,” he says.

Takapourewa, where the reptiles have come from, is predator free and home to 30,000 tuatara, or half of the country’s population.  Today’s transfer operation has successfully reintroduced tuatara into parts of the country where their ancestors lived prior to predation and habitat loss.

The tuatara were accompanied by Ngäti Koata iwi as the kaitiaki (guardians) of the taonga (treasure) and delivered to Kati Huirapa in Dunedin for Orokonui Ecosanctuary, and in Gisborne to Ngati Porou for Whangaokeno Island.  Other groups of tuatara went to Cape Sanctuary in Hawke’s Bay, Young Nicks Head Sanctuary near Gisborne and Maungatautari in Central Waikato.

The 60 tuatara relocated to Orokonui mark the first return of the species to the wild in the South Island. This is by far the furthest south that tuatara have been free to roam in 100 years.

Orokonui CEO Chris Ballie says, “Orokonui is the perfect location to restart the South Island’s wild tuatara population.  The mixture of juveniles and adults will be a good kick-start to re-establishing a viable tuatara population with the necessary genetic variation.”