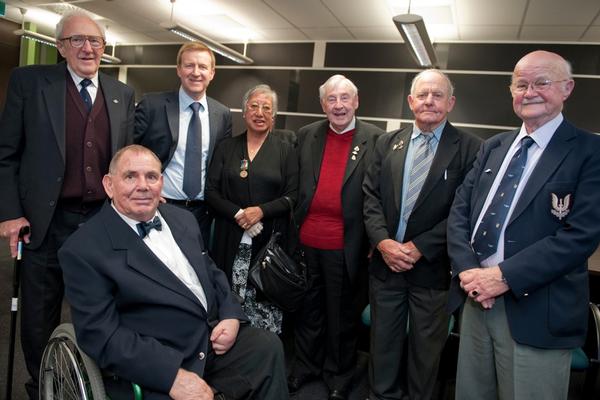 Supporting Mrs Fowler at the ceremony were five members of 2 Troop, NZSAS Squadron who served alongside Charlie in Malaysia in 1955-57. They had travelled from as far as Canberra, Auckland, Queenstown and Greytown to be at the presentation. Charlie served with the NZSAS in Malaysia and was killed in action on 2 May 1956. He is the first NZSAS casualty on their honour roll.

Mrs Fowler said she was pleased that his mates could be at the presentation and their support showed the bond that they had formed while serving in the NZSAS Sqn over 57 years ago.

The medal was one of a number of NZDSM medals presented by the Minister of Defence, Dr Jonathan Coleman to 28 families of deceased ex-service personnel on their behalf at the ceremony at Defence House in Wellington.

Residents from the greater Wellington region, Masterton and Palmerston North were among the families receiving medals on behalf of their deceased relatives.

Since April 2011, when the first applications were called for, more than 43,000 NZDSM medals have been issued.

Applications are now being accepted from all ex-Service people and from the families of deceased ex-Service men and women.  (The family member who applies must be a beneficiary of the will and/or the nearest living next of kin).