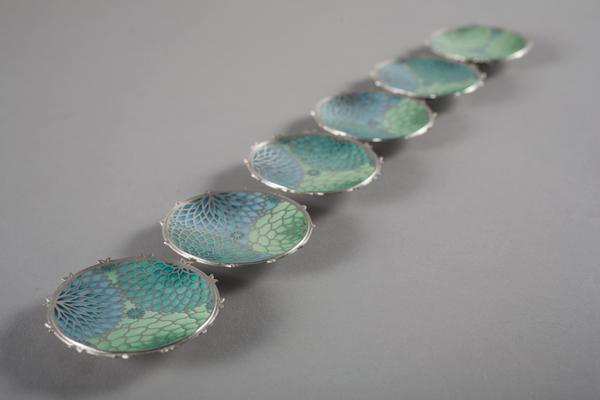 More than 80 works were entered into the competition, from artists as far afield as Kerikeri and Dunedin. An Aucklander Jasmine Watson from Kingsland took out the premier award and a $5000 cash prize for her series of six miniature bowls of sterling silver and enamel, with complex and intricate patterning.

“Enamelling on silver is a labour of love, methodical and meditative, much like the patterning itself, which repeats outwards in multiple directions,” says Areta Wilkinson, guest judge and prolific New Zealand jeweller.

“It’s a body of work to spend time with and contemplate.”

Joining Areta as judges were Mary-Louise Browne, Arts Advisor at Auckland Council and James Pinker, Visual Arts Manager of the Mangere Arts Centre, who says: “The calibre of work submitted this year was overwhelming, with entries from many aspects of the creative process, ranging in materiality and fabrication techniques as well as scale and vision.”

Two more prizes were awarded on the night. The runner up was Eileen Leahy of Birkenhead, Auckland for her set of three necklace pendants and third prize was awarded to Dunedin artist Brendon Monson for his set of three pendants made primarily of bronze and brass.

The theme for this year’s awards came from Princess Te Puea Hērangi and Tainui iwi: “If I am to dream I dream alone. If we all dream together then we shall achieve.” The theme was chosen to inspire the artists and to guide the exhibition’s collective aspirations.

The Objective Art Awards exhibition is open for public viewing until 11 November at the Mangere Arts Centre – Ngā Tohu o Uenuku. All works in the exhibition are for sale. See the Southside Arts Festival programme for information and opening times: http://www.southside.org.nz/events/objectiveartawards2012.asp