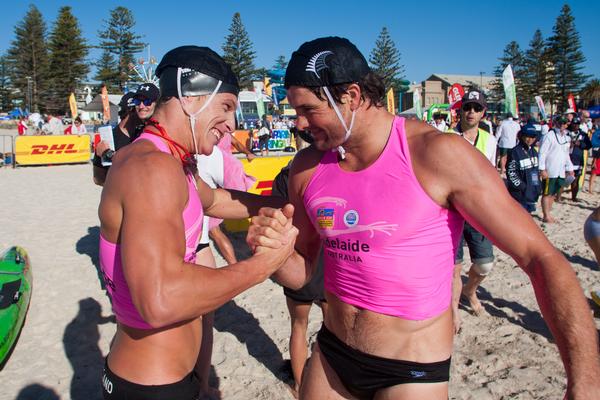 The New Zealand surf lifesaving team is closing in on their first world lifesaving title in 14 years after a remarkable day on Glenelg Beach in Adelaide yesterday.

Against all odds and in the face of a withering Australian assault, the Kiwi team built on the 81-point lead they'd amassed after two days of pool competition.

They collected two more gold medals - both male and female board rescue teams won - and will go into the final day today with a seemingly impregnable 97-point lead.

New Zealand vice captain Kevin Morrison admits the world title may now be New Zealand's to lose. "We'd be lying if we said we weren't thinking about it but our whole motto for the entire campaign has just been to think about the performance rather the result," Morrison said.  "We try and get all the little things right and just let the result take care of itself.  So far, the result is definitely taking care of itself."

Morrison and Max Beattie came up with the biggest play of the day yesterday by winning the board rescue, heading off the star-studded Australian team of ironman champions Shannon Eckstein and Hugh Dougherty. "Max just had the swim of his life," Morrison said. "I couldn't believe I was away first and my heart was in my mouth all the way out, then it was just hell-for-leather coming home."

Eckstein had earlier started the hosts' charge by heading home Olympic kayaker Steve Ferguson in the ski race, while his teammate Kristyl Smith won the board race in front of Kiwis Nikki Cox and Devon Halligan. But Cox and Halligan turned straight around and beat Smith and Rebecca Creedy in the board rescue, with the New Zealand sprinters kept the pressure at the end of the day with a series of podium places.

It was the sixth gold medal by the Kiwi women after collecting five in the pool; team captain Andy McMillan joked the pressure was on his male charges. "The girls have been carrying this team a fair bit and the boys wanted to get a gold and they were stoked with that one," McMillan, who made today’s surf race final, said. We really just wanted to come out firing. We did really well in the pool and we just wanted to keep that momentum and keep attacking.  We've got so much strength on the beach and we've done all the work - we just need to believe in it. Today we've just got empty whatever we've got left in the tank and not let our foot off the throttle."

Dougherty admits the Australian team has a tough task ahead of them but they haven't given up yet. "You don't want to lose to anyone but New Zealand and us have been pretty close for a while and they've been trying to knock us off so it would be nice to get up and beat them," he said.

New Zealand's last title in the championships was in 1998 when Cory Hutchings and Trent Bray spear-headed victory in Auckland.