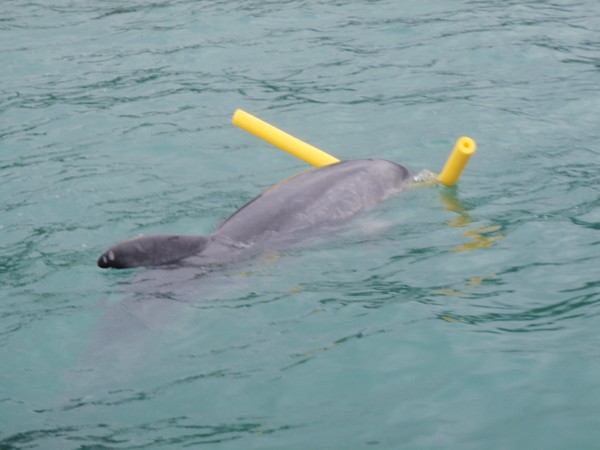 Moko the Dolphin in Whakatane

The fun with Moko the young Male bottle nosed dolphin continues in Whakatane after he followed 'Diveworks' our dolphin watching charter boat into the Whakatane harbor from outlying Whale (Moutohora) Island several weeks ago after he moved from Poverty Bay to the Bay of Plenty.

Moko stayed in the Whakatane harbor vicinity for several days entertaining many with his playful antics as far upriver as the town bridge where he recovered a bright orange road marker cone from the river bed raising it to the surface with air from his blowhole.

A slight fresh and discoloration of the river saw him leave to take up new residence at nearby Otarawairere bay and Westend, Ohope beach were he entertains hundreds every day swimming with them and stealing noodles, bogie boards and surfboards.

Maligned with reports of aggression we have found him to be very gentle but extremely powerful, if he wants your toy he will take it. He has a fondness for noodles which he rides much like we do and he rubs them with his nose to make them squeak. Current Whakatane ocean temperatures of 22 deg Celsius also add to the delight of swimming with him.

Moko now has his own local Facebook page Mokoinwhakatane' and a Blog which records his whereabouts.