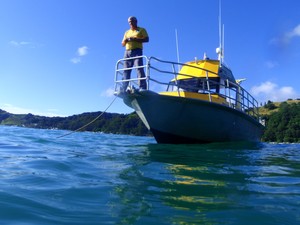 WHAKATANE — An epic 6 and 3 quarter hour battle with a truly monstrous fish has left the 11 man crew of the Whakatane charter vessel Diveworks exhausted last night.

Friday, 1 January 2010
Environment 7:21AM
Swim with seals provides a new tourist opportunity for the Eastern Bay of Plenty

BAY OF PLENTY — Eastern Bay of Plenty approved Marine mammal tourism operators who attended a Swimming with Seals workshop run by the Department of Conservation late last year received a welcomed Christmas present on the afternoon of the 24Th Dec when they were granted concessions to swim with seals in the region.