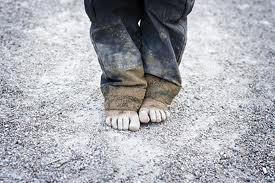 Recently the NZ cabinet agreed to provide $5 million in bridging finance to fund team NZ to ensure staff are secured until 2014 – this ‘benefit’ was not from WINZ of course and there would be no punitive conditions laid out upon receipt of it and no ones kids would go hungry unlike baby Blair and the many hundreds of thousands of other nameless babies – toddlers and children whose parents for whatever reason find themselves unable to pay their rent, or even afford a house or buy food when benefits are cut because  hoops were not jumped through in the right order or time or the right way

In his ground breaking documentary – Minding the Gap – film maker Bryan Bruce revealed that more resources, time and energy go into enforcing punitive measures and prosecutions against beneficiaries  then for tax dodgers – it was revealed that errant tax payers owed the government something in the vicinity of  BILLIONS of dollars – yet more effort go in to pursuing  the most vulnerable  - sole mothers, sick and disabled people over riding the rights of all children involved

“…..It is stating the obvious to say that public policy decisions affect children and that failure to consider their likely effects on children could lead to unforeseen, negative outcomes…… New Zealand policies of the 1990s are a case in point. In 1991 benefits were slashed at a time when unemployment was already on the rise. Between 1992 and 1999, 11,000 state houses were sold and from 1993 state house tenants were charged market rentals (Johnson 2003). In the wake of this, the rate of child poverty soared (from 13.5% in 1987/88 to 34% in 1992/93)  as did rates of overcrowding, substandard housing and a raft of poverty-related diseases, including the meningococcal epidemic which caused 119 deaths between 1991 and 1998 ……."

“One way that such consequences might be avoided in future is by increasing the visibility of children in the development of public policy. Child impact assessment is a process which does precisely that. By this process, prior to the implementation of a policy, its likely impact on children is assessed. Policy is assessed against the principle of “the best interests of the child”; it is then adjusted to mitigate or remove any negative impacts and, where possible, to maximize benefits…”

has this been implemented – and if not why not ?

Where are the human rights lawyers ?

where are those whose job it is to ensure – being a signatory to such ratified rights of the child are actually being protected – where are you ?

what sort of mockery is the rights of the child if no one is actually looking at what winz is doing ?

“…….The United Nations Committee on the Rights of the Child recommends that states which have ratified the Convention adopt child impact assessment for all policy that affects children ……(UN Committee on the Rights of the Child 2003:11). This recommendation has been heeded to varying degrees by governments around the world, including Belgium (Flemish Parliament), Finland, Scotland, Northern Ireland and Sweden. ………Here in New Zealand, the Agenda for Children, which was endorsed by the Government in 2002, proposes child impact reporting as a possible future development……”