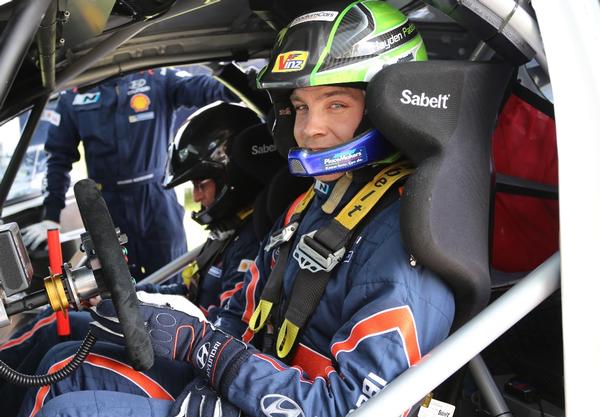 Paddon and Kennard keeping calm ahead of WRC debut

Speaking from his base in Frankfurt before heading to the 5-8 June running of Rally Italia Sardegna, Paddon says: “We have to sensible and stay calm. Our first event in the Hyundai i20 WRC is not about setting the world on fire. It’s about getting back in the groove, learning and getting experience to build on for the following events.”

When he joined Hyundai Motorsport in February this year, Paddon become the first New Zealander to secure a professional WRC contract, a feat that followed his becoming the first person in the Southern Hemisphere to win the FIA Production World Rally Championship at age 24 in 2011.

The Italian event is the first of seven world rallies that Paddon and long-time co-driver John Kennard will contest with Hyundai Motorsport this year. The duo will not only be competing in the Hyundai i20 WRC for the first time; they’ll be contesting the Italian rally for first time too. But having made his debut on various WRC events in Group N and Super 2000 World Rally Championship category vehicles with Kennard alongside, Paddon isn’t fazed by facing the challenges of 395 competitive kilometres on the island of Sardinia. The rally is known for its fast and narrow roads which become rutted and rougher as the field passes and early summer temperatures reaching 30°C – there’s little no room for error.

Paddon says: “To finish is the main goal but if we could also get some driver points that would be good too.”

Recent testing with Hyundai Motorsport in France and Poland has been very successful.

“So far this year I have probably already completed more testing mileage than what I have done in the last three years accumulated, so time in the seat is priceless. Already I’m feeling at home in the car and I’m starting to feel that I can easily push. We have, of course, been trying lots of different set-up combinations on the car and I am lucky to have great team mates who have also been sharing data to help me learn.

“The whole team works closely together, between the engineers and drivers, and that’s why it’s such a great environment for me to learn in. I can see what Thierry (Neuville) is doing and talk to him about it, and likewise with Juho (Hänninen) and Dani (Sordo). We’ve tried some of the things they’re doing and we tried stuff on our own as well because my driving style is different to theirs. I tend to be a little smoother so I want the car to be doing some different things.

“As this is our first time competing in Sardinia, we are going a little into the unknown. We’ve been able to study some video and from what we’ve seen, there is a real variety between fast and slow but one thing in common is the stages are narrow, technical and with a lot of rocks. It’s now coming into the Mediterranean summer, so warm sunny weather expected which will make this event the most physically demanding of the year.”

Hyundai Motorsport Team Principal Michel Nandan said: “Hayden is a promising young driver with big potential who could go a long way in this sport. Hayden and John have already done some good mileage in the Hyundai i20 WRC ahead of Sardinia and they have also spent some time with the team in the workshop to learn more about the car - we’re very happy with the work they’ve done so far. For Rally Italia Sardegna the common goal is to finish the event and to gain as much experience as possible.”

The rally’s schedule sees Paddon and Kennard participate in the official shakedown on Thursday before the official opening and super special stage that evening in the south coast town of Cagliari. Friday’s repeated loop of four stages takes teams from the rally host town of Alghero on the west coast to well-known stages in scenic hills and undulating forests in the the centre of the island. Saturday’s long leg of 188.50 km returns to the same area and comprises just two stages repeated morning and afternoon; one of the stages – the 59.70km Monte Lerno – could be the longest test of the whole WRC season. Four final stages on Sunday conclude the event.

The start order for day one is based on championship order, so Paddon expects to start in around 14th position. For the second and third day, the WRC competitors start in the reverse order of their finishing order for the previous day.

Paddon says the closer he gets to the event, the more nerves build. “Of course I’m excited and I can also draw on having made great progress with physical and mental training in the past six months. Both John and I are focussed on working hard to make the most of the opportunity and feel ready for the challenge ahead.”

Several members of Paddon’s family and some of the shareholders of his management company, Hayden Paddon Rallysport Global, are travelling to Sardinia to watch Paddon and Kennard in action.