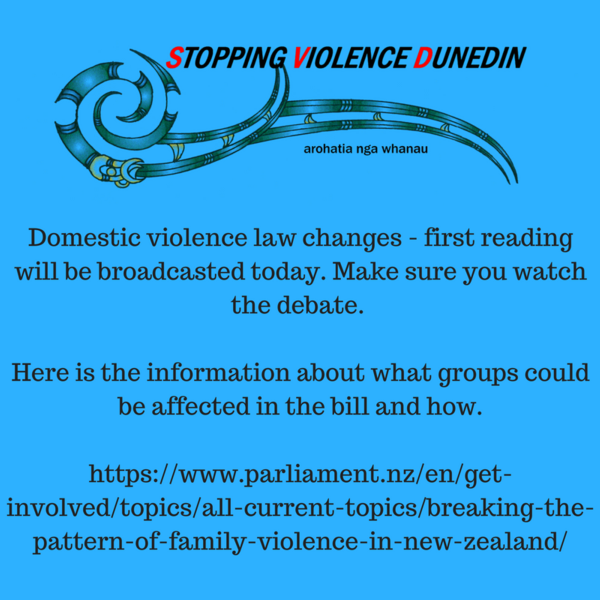 The family violence amendment bill, will be read by the New Zealand Parliament for the first time today.

Here is the information about what groups could be affected in the bill and how.

What is the bill about?

The Family and Whānau Violence Legislation Bill would implement the Government’s “Safer Sooner reforms” policy announced in September 2016. It proposes a raft of changes to the Domestic Violence Act (and other related Acts), with a focus on:

getting help to those in need without them necessarily having to go to court
ensuring all family violence is clearly identified and risk information is properly shared
putting the safety of victims at the heart of bail decisions
creating new offences of strangulation, coercion to marry, and assault on a family member
making evidence gathering in family violence cases easier for Police and less traumatic for victims
making it easier to apply for a Protection Order
making offending while on a Protection Order a specific aggravating factor in sentencing
supporting an effective system of information sharing across all those dealing with family violence
enabling the setting of codes of practice across the sector

What does the bill do?

The bill proposes extensive changes to the Domestic Violence Act 1995. These include, among other things:

The Crimes Act 1961 would also be amended, in order to provide for several new offences:

The bill also seeks to amend the Bail Act 2000, Care of Children Act 2004, Criminal Procedure Act 2011, Evidence Act 2006, and Sentencing Act 2002. In total, it would make consequential changes to more than thirty pieces of law.

The bill was introduced on 15 March 2017 and is set down for first reading.