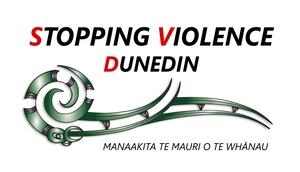 Please get behind this amazing cause we need donations to keep running our vital services in our community.

its that time of year again with the midwinter carnival apon us we have a stall in the octagon selling hot soup and fresh bread to feed the masses, get along to the octagon tomorrow saturday the 24th of June and support the team and keep those midwinter blues at bay.

Monday, 22 May 2017
News 2:23PM
stopping violence dunedin to be at midwinter carnival.

Stopping Violence Dunedin had a promotional stall at the Otago Polytechnic in the Hub on Thursday the 18th May 2017.

The Family and Whānau Violence Legislation Bill is being considered by Parliament.

A reminder that Stopping Violence Dunedin will be closed on Tuesday 25th of April due to Anzac Day and remembering the fallen.

Our hours of operation are the following; We will be shut Good Friday (14/4) through to Easter Monday (17/4) and open the rest of the week until Anzac Day We will also be closed on Anzac day (Tuesday 25th)  On behalf of our team, have a safe and happy Easter New Zealand.

On behalf of Stopping Violence Dunedin we would like to give a big thankyou to Bupa NZ for enabling us to participate in this weekends Women's Lifestyle Expo in Dunedin.

Stopping Violence Dunedin will be at the Dunedin Womens lifestyle expo this weekend from 10am to 5pm along with our partner agency Bail on Bullying.

Tuesday, 28 March 2017
News 1:09PM
MP Michael Woodhouse visits Stopping Violence Dunedin to talk about how we can work better with the government

On Sunday night at the Dunedin Fringe Festival awards night.

News 2:34PM
Stopping Violence Dunedin thanks the public for their support over the Fringe Festival

Thank you so much to all the members of the public who supported our shows last week.

Stories to Heal Violence show will be opening on Thursday night.

Stopping Violence Dunedin will be part of this amazing conference from the 20th - 22nd of April.

News 1:32PM
Only 16 days to go until opening night for Stories to Heal Violence.

Only 16 more days to go until opening night of our show.