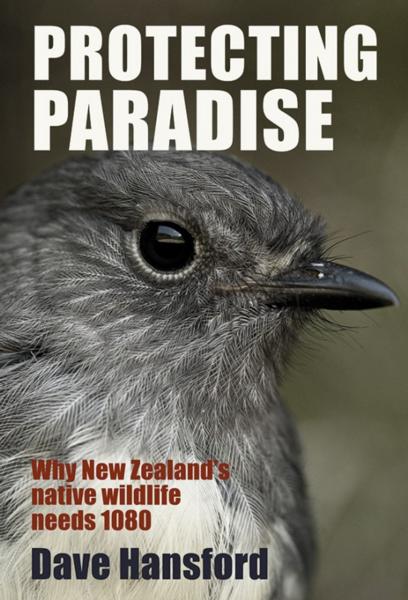 Dave Hansford is a good writer, he had a tough brief, discredit any and all claims that 1080 is dangerous and he did, sentence by sentence, he stunningly dismissed all experience and concerns anyone ever had around the use of a highly acute toxic compound which has no known antidote, he did it so well that by chapter four he almost had me convinced that 1080 was benign and that’s dangerous and irresponsible because it isn’t.   He begins by stating how ‘natural 1080 is in the environment.  This synthesized and highly potent compound is not natural.

As a science writer Hansford should have known this

….”….. Sodium monofluoroacetate is the chemical name which accurately describes the structure of manufactured 1080 used for pest control in New Zealand, and is the chemical name which should always be used in scientific publications and popular reports issued by agencies in New Zealand.  It is sloppy and misleading to do otherwise. There is no natural form of manufactured 1080 (sodium monofluoroacetate)..."....

1080 chemistry is worth reading to debunk this mischief and clear up any remaining confusion deliberate or otherwise.

The two are different compounds and should not be confused especially by a science writer, who is writing a book that supports its use when so many people are pointing out its dangers.

This appears to be a deliberate mischief, and dangerously misleading and begs the question, what if someone acted on this assertion, that it is safe to drink and then drinks it and gets poisoned, who is to blame for that, and if that person dies, can manslaughter charges be brought?  Hansford is not the only one saying this, many deliberately confuse the two in order to soothe public and even government concerns in order to support a million dollar global industry.

The implication has always been that because it’s natural in the environment or traces of it is in your cup of tea, that it is somehow safe to tip it into living ecosystems and water sources.  This is misinformation at its most deliberate.

Are the district health boards being told that compound 1080, sodium fluoroacetate poses ‘less than a minor’ risk in the environment because it occurs naturally in some plants overseas tso its all ok? Do they know the difference – did you? Hansford didn’t and he’s a science writer.

There is much misinformation in this book but you wouldn’t know it unless you knew some of the people he arrogantly dismisses, or know the events that have taken place or have taken the time to read the science, and or listen to the first-hand experiences of people on the ground, people in rural communities; people affected.

This book is both a revelation and a worry.  It’s a revelation because there are so many insights into the thought processes behind the drops.

For instance, Hansford tells us why NZ doesn’t follow the manufacturers instructions for keeping both 1080 poison and the 2nd generation anti-coagulant Brodifacoum out of the nations waters, its worth repeating

....."....yes 1080 baits had fallen into the Kauaeranga river but this was no scandal no wrongdoing. these pellets were lying exactly where they were supposed to be - inside the operational boundary prescribed by the Waikato Medical officer of health, Anita Bell - they were allowed to be there, in part down to pragmatism. The NZ back-country is cross- thatched by thousands of streams - if you drew a 20-metre buffer aroundeveryonee, pilots simply couldn't fly the contortions necessary. work the trigger on the hoper quickly enough to avoid them all - even if they could it would leave many untreated gaps that there would be more pests left behind than killed - So public health officers allow them in their permissions for baits to be dropped into waterways, which drives 1080 opponents mad...".....pg 75 chapter Death from above.

…”….My primal brain was sounding an alarm while my 21st century rational brain was saying there was nothing to worry about..”..

Nothing happened he was happy to report.  But he missed the bigger picture. He missed the intuitive warning signal and so he dismissed it as so many of us do.

The primal brain is something that we share with all natures creatures, they do not rationalize their primal warning signs away like humans have done, they act on them but ‘man’ and his 21st-century rationale appears to disregard this so very basic intrinsic nature of himself and therein lies the problem and the challenge.

There is no real scientific reason why NZ is dropping this ecotoxin into the sources of its waterways, it boils down, according to Hansford, to the fact that it’s just easier that way, it's more convenient, so best just ignore the manufactures warning labels stating both poisons are dangerous to aquatic life and override your own primal screaming, and that’s the worry.  And now it is in the environment it has to be factored in.

The Provisional Maximum Acceptable Value is an interesting thing.  Because NZ drops Sodium monofluoroacetate aka compound 1080 into all its sources of water within its ecosystem we now have an acceptable level added to our drinking water of 0.0035.  Officially the World Health Organisation (WHO)  have no guideline value, so others have placed one on it.

However, there are experts who have told us that at even at infinitesimally small parts -1 part per trillion could cause hormone disruption

Worst still, Hansford arrogantly dismisses clusters of miscarriages in heavily or densely poisoned areas such as Featherston where not one but two medical doctors, reported that the area had experienced abnormally high miscarriage rates and they suggested the poison drops into the water may be a factor. Hansford however, blames these on Featherston being a low-socioeconomic town with rampant crime and a drink and drug culture.  How does he validate his claims?  Simply on the basis that he lived there for a few years.  Using the same unscientific rhetoric he spent 300 plus pages blaming everyone else for, he quickly dismissed the concerns of two professional doctors.  There are many documented  1080 health coverups

But back to the book.

In a sane moment the writer reflects and speaks the truth –  on page 75 under the heading troubled waters he writes, and it's worth quoting in full because it is so lucid and profound

…”….It's not until you see one (a bait) in the forest that it all comes home – that you fully appreciate the magnitude of what we’re doing here.  We’re hurling a bane into our cathedrals – our place of sanctuary of spiritual recourse.  Sodium fluoroacetate might be a natural compound, but we’re not just applying a bit of nature to help fix nature here.  The bait, that little pill for our ailing forests represents viscerally unnatural intervention.  It struck me that we are right to harbour reservations, it's proper that we have the debate because it is a grave thing to do….”…

And yet throughout the book the man refuses to debate, refuses to accept peoples concerns, their worries, their first-hand experiences, instead he lashes out and ridicules anyone who doesn’t agree with the orthodox ‘official’ science.

There are many inaccuracies in this book.  I cannot vouch for the science he quotes but I was concerned at his less than professional character assassins of a few people I have come to know, reminding me of this old saying

If at first, you cannot detract from the truth of a thing, attack those that are saying it and he has done this very successfully and engagingly throughout the book and before you know it you too are maligning all who have a different view than the one the official science propagates.

I got a deeper sense of unease reading this book each page I turned, all of us are really on the same page, we all want what is best for our ecosystem, for our birds and wildlife, we simply disagree with the modality.  For Hansford, if it’s not a scientific perspective then it's not real, its hyperbole at best or conspiracy at worst and this is exactly what I thought of his book, hyperbolic conspiracy of a poison industry hell-bent on demonising any challenge to its ascendancy.

Paragraph after paragraph he constructs a narrative of disparaging disrespect for anyone who does not share his views, sparsely peppered with gems of sanity such as ….not to say …or …none of this suggests ..while craftily snaring the reader into his game of making a deadly eco toxin, an insecticide no less, a poison without an antidote, a horrible and cruel killer – safe,  and anyone who objects – a nutter, and he does it really well even going so far as to invalidate senior lecturer at Victoria University, Sean Weaver when he dared to question the results of  other studies that said there were no connection to1080 being an endocrine disrupter.

…”…..such studies,..”   Weaver said …”…were not capable of coming to conclusions about the endocrine disrupt potential because they focused only on a narrow window of symptoms…” … this he said …”…is not sufficient in the analysis of endocrine toxicology ..”

….” …as far as toxicologists were concerned the question had been answered 1080 does NOT disrupt the endocrine system ..”…

Sean Weavers statement illustrates the wide open flaws in much of today’s science.  In a recent NZ article IS SCIENCE FOR SALE  one discovered that scene can be open to abuse through fear of funding or loss of jobs.

While Hansford is an engaging writer I found myself getting bored, page after page, of disparaging commentary of peoples experiences and concerns, people whose views differ from the established order for which Handsford not only speaks but got awarded,  Challenging all before him, rendering 1080 harmless at every full stop, it is a work of perception management.

This is a perilous read, you must be equipped with knowledge and extremely high doses of common sense, for these are the skills needed, to navigate through some slippery slopes to avoid rabid attacks and twisted logic, half-truths an misinformation that have turned otherwise seemingly intelligent people into ranting loons fearing their town was full of tin foil hat wearing nutters – and people threatening to drink a deadly poison because they were told it was naturally occurring in the environment already and therefore safe.  It isn’t

This whole book goes out of its way to make what is a deadly and dangerous poison - safe. And that is wrong because it isn’t safe, it is so deadly that it has no antidote and it kills anything that eats it or breaths it.

Compound 1080 is an insecticide, birds eat insects, birds feed insects to their babies.  Poison baits get caught in clefts of trees which fill up when it rains or sits in puddles breaking down poisoning the drinking water of any creature who is thirsty enough to drink it.

Compound 1080 is deadly to humans.  Being exposed to it may not kill you outright, rather it is more likely to cause irreparable damage to the body making a person seriously sick if breathed via dust at storage/loading sites or when it is dropped while your having a picnic.