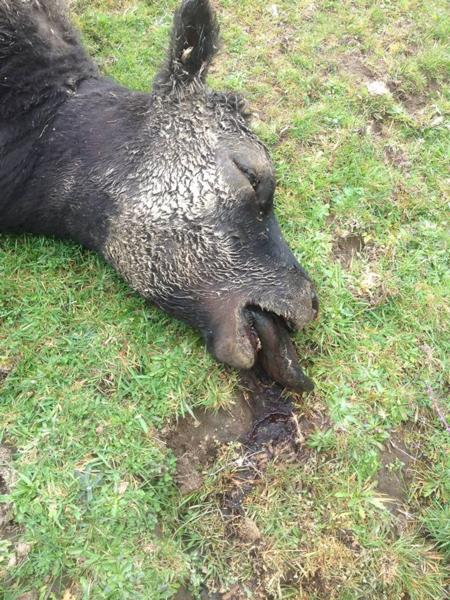 Paula and Mark Stone thought they were doing the right thing when they agreed to DoC’s request to aerially poison the bush part of their farm with 1080 poison. They were told the operation would be well managed, it was safe for their stock and necessary to control predators. DoC would run the operation and ensure everything was done correctly.

They were not told about alternatives – for example that the 4 hectare mixed bush and pasture block could be trapped. Nor were they told that pasture exposed to 1080 pellets could not be used for many months due to MPI restrictions.

The farmers moved their cows before the drop to a paddock nominated by DoC. They were assured by DoC that DoC was responsible for the operation and for all security.

Days after the poison was dropped they found 8 of their prized cows dead and two aborted calf foetuses were found in the paddock where the cows has been put at DoC’s request. Some of the surviving heifers were lethargic and obviously unwell.

No poison baits were found in this paddock- but that is not surprising as the cows would have eaten them as they look like supplementary feed pellets.

1080 poison baits were found spread widely over pasture in the next door paddock well outside the bush in the adjacent paddock. DoC says the dead and sick cows must have broken into that paddock, eaten some of these pellets then returned to the original paddock and died. The Stones are not so sure.

DoC sent a vet to test the cows. The vet suggested these cows may have died form Clostridium- the bacteria responsible for botulism. This was the same disproven illness that Waikato hospital initially claimed was responsible for the prolonged hospitalisation of three members of the Putaruru family last year.

This was despite the cows being healthy immediately prior to the poison drop and the 1080 baits being found on their pastures.

As with the Pututaru family the bulging eyes, and other symptoms matched the classic symptoms of 1080 poisoning.

DoC arranged to take samples to test for 1080 poison. The Stones have taken their own samples.

DoC offered a security guard, 8 bales of baleage and to bury the dead cows.

DoC sent a small digger which the Stones felt was dangerous on the steep hillside. DoC was unable to provide helath and safety certification so the mass burial operation was stopped.

WARNING FOR OTHER FARMERS

Until now Paula and Mark Stone trusted the government and DoC. Since living through this nightmare they warn other farmers that this was a huge mistake. They felt under pressure to do their bit for conservation, and were assured the poisoning would go to plan. They were not told about the risks or the alternatives such as trapping this 4ha block or that poison might go on their pastures. They felt under pressure and agreed to poison being used in the bush based on what they were told by DoC.

Their advice to other farmers is STOP. Ask more questions. Don’t make the mistake we made. Don’t agree to poison being spread on your land unless you fully understand all the risk to your stock, your business and the massive emotional toll.

It is unclear why DoC decided to aerially poison this 4ha mixed bush and pasture block. The Stones believe trapping would have been a much safer option but this was not offered to them.

It is unclear why DoC did not warn the beekeepers about the poison drop as bees are known to harvest 1080 baits and risk contaminating honey.

MPI has restriction on the use of pasture exposed to 1080 for food safety reasons. It is unclear why DoC did not warn the Stones about this. Enquires are underway with MPI to check on the fate of the other cows in the herd that may have been exposed to 1080 and what withholding period is require for the pasture where the poison baits were found and where the cows died.

Investigations are continuing to find out how the poisoned cows can be safely disposed of. The Stones want them taken away from their farm.