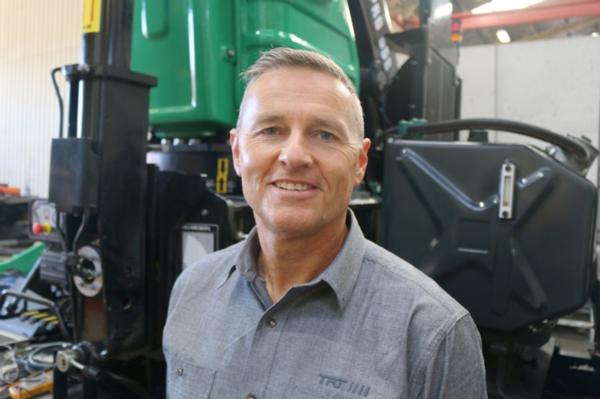 TRT has appointed Hillary Naish to the role of national sales manager for TRT New Zealand’s Hiab New Zealand distribution. Hillary started on 6 April 2021 and will be leading the HIab team in New Zealand. Based at TRT’s Hamilton Head Office, he will continue to lead business growth plans across all the Hiab equipment brands.

“Hillary has a strong heavy equipment background, and this appointment confirms our commitment to support new and existing Hiab customers and their assets for the long term”, says Bruce Carden, TRT’s director of innovation and sales. From the time TRT become the Cargotec distributor in late 2018, we have been committed to the success of the Hiab brands and equipment in New Zealand and we have developed a team with a depth of knowledge and a nationwide service agent network to support this.”,

Originally from Hamilton, Naish has returned from a career in Melbourne, Australia, to be home with his grown family.

Starting his career as a design engineer, Naish has naturally progressed to business growth and development roles that include the Commercial Manager for the Chiefs Super Rugby franchise and in the automotive industry for Volkswagen New Zealand.

Naish adds, “This is an exciting challenge for me. The strength of the Hiab brands and the customer relationships TRT has developed in its short time as the distributor and is the ideal platform for the next phase of growth for Hiab brand in New Zealand. With an experienced, dedicated and knowledgeable Hiab team to support me, I look forward to meeting with customers in the coming months.”

Hiab is a world-famous brand, founded in Sweden in 1944. “Hiab Cranes have been in New Zealand for over 30 years. Based on the quality and reputation, the brand is now synonymous with truck loader cranes and knuckle boom cranes, no matter the manufacturer. It is exciting to be able to continue to develop the legacy of Hiab”, concludes Naish.

With purpose-built facilities in NZ and Australia, TRT continues strong growth in both markets with a range of locally designed and manufactured product and manage growing network of parts and service support for a broad range of customers from Tier One operations to owner-operated businesses.