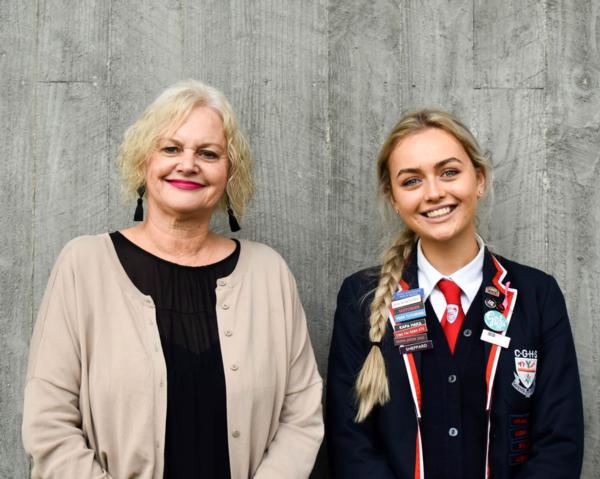 School Principal, Christine O’Neill, says the results were released to staff and students in an assembly yesterday morning, with parents receiving a letter to keep them informed.

“I commissioned this survey on sexual harassment following concerns being raised by our students”, she says. “It was clear we needed to know what was actually happening, how prevalent it was and how our young women and rainbow community deal with it,” she says. “The number of incidents as well as the lack of reporting and the fact that our students have normalised this totally unacceptable behaviour, are all very concerning.”

Ms O’Neill says additional support has been put in place at the school for both staff and students as she expects the survey results will be triggering for some.

“The safety and wellbeing of our staff and students are our number one priorities. In fact, that is why we commissioned this survey. Everyone has a right to feel safe and clearly they don’t. We would encourage parents and caregivers to talk to their teen, start a conversation. They need our support and involvement.”

Researcher, Liz Gordon who undertook the survey work, says more work must be done to establish how young people around the country are experiencing and dealing with sexual harassment.

“We know that victims hold on to the trauma related to sexual abuse for 50-60 years. It is not OK that so many of our young people, or indeed anyone sees sexual harassment as part of everyday life,” she says. “The prevalence of sexual assault and harassment and the lack of reporting should also be of major concern to everyone.”

There are many similarities between what the CGHS survey has found and what was reported in a report from OFSTED (Office for Standards in Education, Children’s Services and Skills) in the UK earlier this month. Liz Gordon says this suggests a worrying global societal pattern.

“Also mirrored in our survey is the way our young people change their lives to manage the sexual harassment. This includes dressing in baggy clothing to hide their bodies, travelling different routes to avoid harassers and changing their social lives to reduce potential interactions with harassers,” she says.

CGHS Head Girl, Amiria Tikao, says she is not surprised by the survey results as she and her peers live with sexual harassment every day – and have for years.

“I am sorry to say this is not a surprise. I think adults are likely to find it more shocking than we do. What we need to do now is work with our students to support them to manage issues they may be dealing with and empower everyone, everywhere to call this kind of behaviour out,” she says.

Christine O’Neill says she is immensely proud of all the students who took part in the survey as it takes courage and strength to share such personal, and in some of the cases, very confronting experiences.

The survey outlined a definition of sexual harassment which was broad-ranging and inclusive, as follows:

Sexual harassment is any form of unwanted verbal, non-verbal or physical conduct of a sexual nature that creates an intimidating, hostile, degrading or offensive environment. It can be relatively minor or very serious. This can include unwanted physical contact, invasion of personal space, suggestive remarks, comments on dress and appearance, jokes of a sexual nature or the display of sexually offensive material in a public space.

The reporting and recommendations in this document represent my own findings and not those of the school.

One aspect of the complexity in preparing this report is that some students in their responses made specific allegations of rape or behaviour which would otherwise constitute a criminal offence. To respect the participants these words and descriptions have been retained, but this does not mean that the situations described have been investigated or prosecuted, as that is beyond the scope of this study.

This Survey of Sexual Harassment is a report of a whole of school survey carried out in May 2021 for Christchurch Girls’ High School. The research received formal ethical approval and operated an ‘opt in’ system for those under 15 (with parental consent) and an opt-out system for older students. The survey was sent to 1042 consented students and 725 participated, a response rate of 71.2%.

The survey included a definition of sexual harassment and 430 participants noted they had been harassed. Most stated it had occurred 2-5 times, but a quarter had been harassed more than ten times.

Harassment included verbal, space, written and physical or sexual contact. On average, those who had been harassed experienced 2.5 types of harassment.  Sexual harassment was most likely to take place outside school and around town, out socialising or on public transport. Online incidents were also common.

Men constitute 91% of the identified sexual harassers, including young men the same age as the students and older men. Most common events were cat-calling, body shaming and being rated on looks. Other forms were also frequent.

In 2021 to date, 381 participants report a very high 2677 incidents of sexual harassment, or seven per student who had experienced harassment. Most incidents were carried out by lone males, with one quarter by groups.

Students were asked to describe their ‘worst’ incident of sexual harassment. Over 20 students described being raped by individuals or groups. Many other incidents involved young males at social events, on the streets or on public transport. Egged on by friends, many comments were extreme and terrifying.

Participants described many incidents of physical and sexual abuse. Almost the same number of events were caused by older males on the streets, either alone or in groups, often in cars. Older males also harassed students on public transport and in taxis and Ubers.

The worst incidents stirred up many feelings. Students were uncomfortable, nervous, degraded, upset, embarrassed and afraid, among other feelings. Only a tiny number, less than 10%, received any help or support. Most did not mention asking for help.

Changing aspects of their lives:

More than 60% of those who had experienced sexual harassment have changed aspects of their lives to try to ensure it does not happen again. The most common change is clothing, with students donning baggy clothing, jackets, shorts under skirts, trousers and other additional clothing to try to deflect attention.

Many have changed their routes home or become hyper-alert about who is on the streets. A significant number have been harassed on school and town buses and work hard to change their routes, times, and bus habits. Many have stopped using buses at all.  Another strategy is to avoid boys, especially in groups. They might change direction, keep their heads down, pretend to talk on the phone and not go to particular places.

Other changes include no longer drinking alcohol, not going to parties, learning self-defence, never being alone and keeping their phone handy. Participants outlined a range of strategies to keep themselves safe.  In most cases these work, but it does mean doing things differently but still living with the risk of harassment. Sometimes they lose friends as a result.

While instituting personal changes can reduce exposure to sexual harassment, the overall threat does not reduce.

Many think that harassment has been normalised as an expected part of the society.

Their main demand is to educate young men about the effects their abuse has on young women, how to stop being abusive and turn around their culture. In their own school, they want to receive active support, to know that wherever they seek help it will be available.

There is a need for education and discussion over what sexual harassment is. For example, is a little cat-calling just ‘good fun’, or the beginning of a pipeline of abuse? In particular, there is a need to break the code of silence that surrounds such discussions. They plead for more openness.

A key concern of this study is the very low level of reporting, including, apparently no reporting of individual or group assaults revealed in the study. The main barrier to reporting is the tendency for the victims of sexual harassment to be ashamed or embarrassed, and often to blame themselves, or fear that others will blame them. These barriers lead to unprecedented hiding of potentially serious crimes, and the potential also for perpetrators to realise they have got away with it, and do it again.

The age ranges of participants were from 12 to 18, with the modal age being 16. 93% identified as female and around 74% as straight. Nearly three quarters of students were Pākehā New Zealand with the others being Māori, Chinese and from a wide range of other cultures. Sexuality and ethnicity were both mentioned several times as aggravating factors in sexual harassment.

We know there have been 2700 sexual harassments perpetrated on around 400 young women in one school this year alone. I was told the police have been working side by side with the school since the student marches and expect that this report will provide some ideas around better strategies to combat sexual harassment of all types.

No-one reading this report can remain unmoved and shocked about what it discloses about the treatment of young women in our society now. The harassment, and its effects, constitute barriers that will shape and change the lives of those affected.

One person noted that “you get over it eventually, just don’t think about it”. But it is not clear that people can just move on with so much unresolved bad feelings, grief and pain, and plenty of recent evidence from inquiries that abuse stays with the victims for many years.

There is a compelling case for action.

The above can be attributed to Dr Liz Gordon.