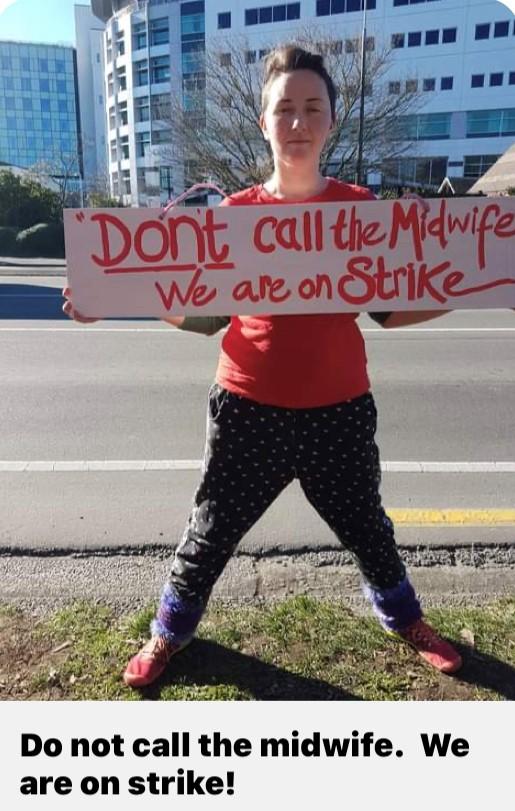 At issue is the pay increase for the Multi-Employer Collective Agreement (MECA) - it falls well short of cost-of-living increases; the lack of backpay (the Midwives’ MECA expired in January); and the term of the Agreement (the DHBs are proposing a term of 27 months through to April 2023).

“Many good things have already been agreed and the only outstanding issues are around the pay increase,” says Ms Ovens. “To have to wait another two to four weeks before we can even get back to the negotiating table with a national strike looming, suggests DHBs and the Government don’t think this is an urgent situation. MERAS has been trying to sort this since last November as the MECA ended in January 2021 and we wanted to avoid exactly what is now happening.”

Ms Ovens says MERAS midwives are at their wits end and want to know how long they have to keep working with chronically poor staffing conditions?

“Our members want to know why there seems to be no urgency around these negotiations when DHBs and the Ministry of Health know there is a severe problem. Of course it also affects our women and babies and it is totally unacceptable.”

Jill Ovens says the country is seeing a coming together of health professionals who have “got to the end of their respective tethers”.

“The union has made every attempt to conclude the negotiations in a timely manner and yet there has been little meaningful negotiation. The DHBs’ advocates have no mandate to negotiate as they come to the table with pre-determined ‘offers’. It’s been very frustrating and this latest position just reaffirms that.”

MERAS members participated in 8-hour strikes run around the country from last Monday [9th August] in Northland, the three Auckland DHBs and Southern DHB, and moved towards Wellington, DHB by DHB, over the following three days, culminating in a rally at Parliament on Thursday 12th August.

Next Thursday’s strikes will be from 8am to 8pm over every DHB in the country. Midwives will be providing life preserving services.

The Collective Agreements negotiated by MERAS with employers not only ensure best practice terms and conditions of employment for midwives, but also recognise the regulatory (Midwifery Council) and professional (the College) structures that oversee the midwifery profession in Aotearoa New Zealand.

MERAS represents around 90% of NZ’s employed midwives and is affiliated to the College of Midwives All MERAS members are also College of Midwives members. MERAS has 1675 members of whom 1459 are DHB-employed, 115 in private maternity units and 78 student members.

This is a midwife who is employed by a DHB or non-DHB maternity facility. These midwives work in a range of roles. Most work as ‘core’ registered midwives in primary, secondary and tertiary maternity units providing care to women who are pregnant, in labour or new mothers and their babies.  Some also work in the community or as specialist midwives, educators or in management roles.  The most senior midwife in a DHB is the Director of Midwifery or Chief Midwife. Most employed midwives are paid through the DHB MECA (Multiple Employer Collective Agreement) or Collective Employment Agreements with individual non-DHB maternity facility providers.