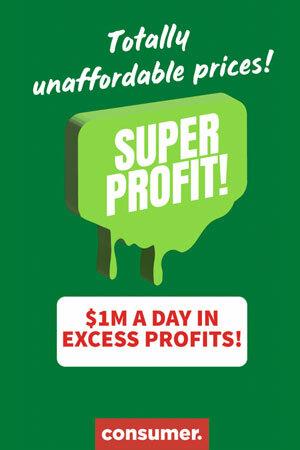 “Every day the supermarkets are taking more than $1 million in excess profits from our collective back pockets. These profits are twice what they should be. We need more competition to drive down prices and give New Zealanders a fairer price at the checkout,” said Jon Duffy, Consumer NZ chief executive.

“The Commerce Commission has recommended the supermarkets consider supplying other retailers. We think this is unrealistic to expect from an entrenched duopoly used to calling the shots. That is why we’re launching a petition.”

To create an even playing field for new and existing grocery retailers, Consumer is asking Minister Clark to consider regulating access to wholesale supply or setting up a state-owned wholesaler. The details of Consumer's request has been outlined in an open letter to the minister.

“There’s power in numbers and we need to show the government that people want action,” Duffy said.

“Sign our petition and share it with your family and friends. We want to create the conditions for more competition in the grocery sector, which will ultimately result in fairer prices."

“We recognise that food prices are going up for a variety of reasons, from the pandemic, to inflation, to the impact of the war in Ukraine on wheat prices. We’re not disputing this, but excess profits on top of already high food prices are a slap in the face for households struggling to put food on the table.”