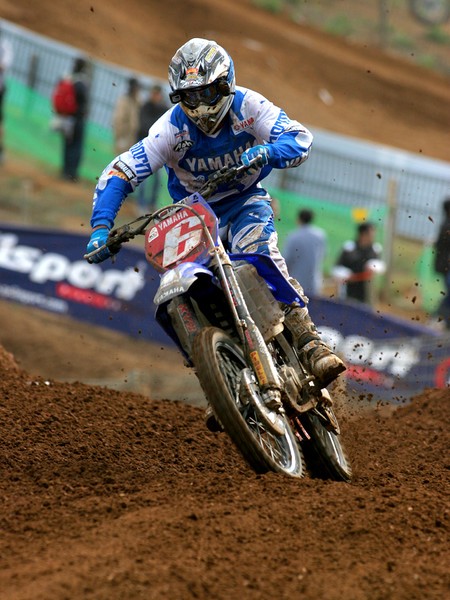 The 6th round of the FIM Motocross world championship has seen factory Yamaha racer, Josh Coppins, stretch his MX1 championship lead to 63 points at the Japanese Grand Prix in Sugo.

Coppins qualified fastest for the event (his second consecutive pole of the season) and had first gate pick going into the first moto. A tight line in the hairpin first turn saw the New Zealander emerge in third as a fast moving Billy Mackenzie raced to the front, passing Mike Brown for the lead. Coppins sealed the Americanââ‚¬â„¢s fate three laps later to settle in second place. Spaniard, Jonathan Barragan put a spanner in the works when a late charge relegated Coppins to third.

With Brown grabbing the hole-shot in moto two and Billy McKenzie once again claiming the lead moments later, Coppins battled with Ken de Dycker for third and tried to find his race rhythm. Deteriorating track conditions made it physically difficult for the riders however Coppins pushed through to third but could not make much impression on the McKenzie and Brown. MacKenzie handed the victory to Brown when he had a huge get-off with five minutes left on the clock. Coppins could not capitalize on the Scots misfortune as he quickly rejoined the race forcing the Kiwi to be content with third.

ââ‚¬Å“I was surprised I qualified on pole to be honest. I havenââ‚¬â„¢t felt good on the bike all weekend and I think it showed in the race. I struggled to find good lines and my rhythm and had to make the best of bad day. It didnââ‚¬â„¢t really go as I had hoped but I did my best. Of course I think about the championship all the time and trying to concentrate on race wins is not easy. On the other hand my consistency has built me a good lead in the championship,ââ‚¬Â explained a somewhat relieved Coppins.

Coppins will return to Europe for some testing with the Yamaha Rinaldi team in Italy before heading to St Jean dââ‚¬â„¢Angely for the Fench GP in two weeks time.