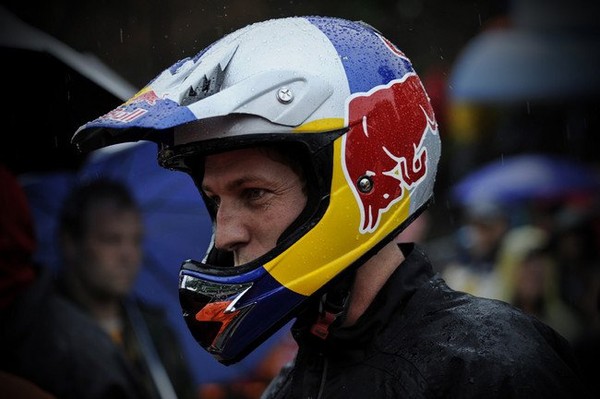 On day four of this epic race, the rain is not only a constant companion but has become the dominating factor of the Red Bull Romaniacs 2010.

The riders started the day from Petrosani in pouring rain and only and out of the initial 21 starters of the pro class only 11 continued the race.

Romaniacs mastermind Martin Freinademetz is known for serving tracks that are very tough to deal with in dry conditions. In rainy and wet conditions those tracks turn into challenges which are taking even the best oft he best riders to their very limits. Even though the rece directors took out the famous „Long Walk Up“ due to the permanent rain, there were more than enough cruelties left for the riders, such as the section called „Congo“, which was an immane challenge.

Even though the Brit Graham Jarvis dropped out of the race yesterday he once again proved to be the one to beat in the stage today that took the riders back from Petrosani to Sibiu. Jarvis came in 30 minutes ahead of the next rider and it’s hard to imagine what results the quiet Brit could achieve if his bike would be as reliable as his riding skills.

The rider who has led the race from the start, Chris Birch from Auckland, had bad luck and lost valuable time due to problems with the electrical system. „I’m riding KTM bikes now for 6 years and about 5,000 hours and I never had a single problem with the electrical system on my bikes. Too bad I’ve lost time today because of a little technical problem“, the New Zealander said at the end of an exhausting day. Birch came in about one hour later than Jarvis but keeps the overall lead.

Paul Bolton (UK, KTM) and the German Andreas Lettenbichler (BMW) demonstrated one of the principles of Extrem-Enduro: While competing against each other heavily in the race there are sections which cannot be done on your own – at least not fast enough. Bolton started five minutes after „Letti“ and the two riders formed a team once Bolton had reached the factory supported rider from Bavaria. Only four seconds separated the two riders in the finish, Bolton finishing second and Lettenbichler third.

Once again Lettenbichler demonstrated an outstanding performance and reduced his overall handicap by 29 minutes, thus putting himself in a better position for the final day tomorrow.

Tomorrow the riders will face the final challenge. The weather forecast predicts rain and riders have to be prepared for another insane track which covers 128km for the Pro class and 110km for the Expert and Hobby classes.