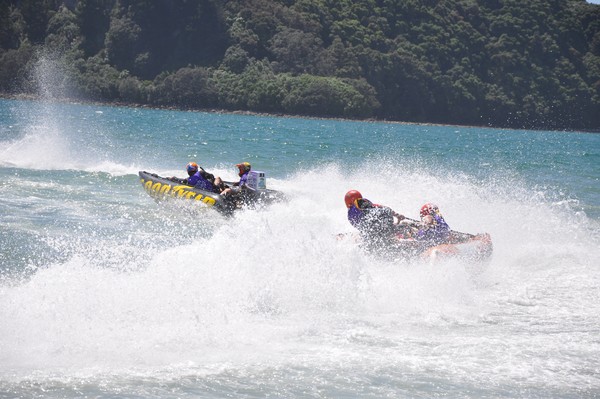 Waipu Cove will be host to the fourth round of the Thundercat Racing National Series competition on January 29 and 30, providing Waipu Cove residents and visitors with an adrenaline filled weekend.

Competitors will participate in the 100km circuit style National Endurance Race off Waipu Cove on Saturday, January 29. The boats will complete six laps around the course, picking up speeds in excess of 80km/hour. The course will be close enough to the beach to enable great viewing for spectators. The Sunday Surf Cross Race will be sure to thrill as the race commences with a Le-Mans style sprint into the water. Competition is fierce as boats compete in a series of heats over several laps on a rectangular shaped course at high speeds. It is an adrenaline filled race with boats making impressive jumps, reaching heights of 4 metres above the waves.

The first three rounds of the competition have already demonstrated exciting and close competition. “Each of the venues Whangamata, Mt Maunganui and Waihi has produced ideal racing conditions with surf around one metre at each,” national Thundercat Association president Steve Frogley said. Frogley says that as racing conditions will vary with each subsequent venue, the national championship title could still be attained by any number of crews. “There will be no room for error or breakdowns for any of them,” Frogley said.

Smuggler Marine, made up of Logan Pringle and Chris Wells, is currently holding the dominant position in the competition. Smuggler Marine is closely followed by Black Pepper in second place and Jungle Coffee in third. As last year’s winners, Smuggler Marine aims to maintain their title as the National Champions. “After gaining two wins in the competition so far, we are aiming to maintain the number one position, focusing on keeping the boat upright and maintaining our title,” Pringle said.