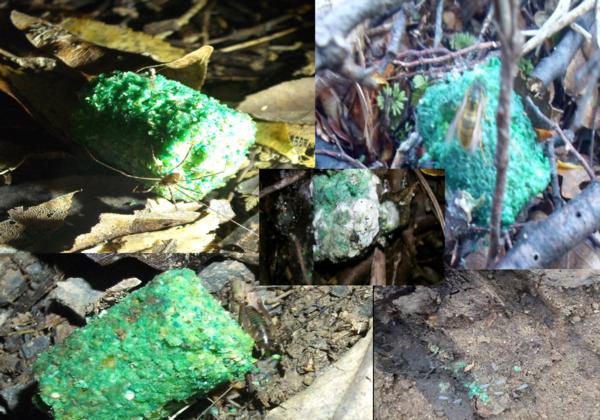 1080 was originally patented in 1927 as insecticide, however once its effectiveness as a rodenticide was discovered it was reclassified in 1942.

Today its ability to kill insects and bugs is over shadowed by the agonising and slow death it brings to any creature  who licks it or eats it including native birds.  Birds like the kea are the ones in the spot light and well they should be.

The NZ department of conservation knows full well that ">1080 pellets kill kea">  and yet they continue to have monstrous justifications as to why they need to drop in areas where kea live.

there are many other ordinary every day kiwi;s ike this around Aotearoa.  When he  explained to DoC what had happened he was confronted with the arrogant reply,  come back when you have the science!

But this is not about the Kea .  It is about the insects that make up a healthy ecosystem.

We may not like bugs, spiders and other creepy crawling things but their presence in the forest is essential for basic ecosystem health and 1080 is killing them, and they in turn are killing our birds.

When you walk into a forest that has been poisoned, that eerie silence  you hear is not just the absence of birds, it is the silence of death at a core level within the forest itself - the insects, the bugs, the worms.

The most important thing that everyone has forgotten

What  is happening to the Mauri of these areas, the life force, the essence of our forests   There is more than we can see in the life of a forest.  The Wairua of the Whenua is being destoryed and that should disturb everyone who understands the importance of the essence of life that underpins everything.

The photo attached to this article shows 5  photo’s of insects on 1080 bait – including a bee – these photos have been recently taken from various forests within NZ days after aerial poison drops.

It is disturbing that dropping a known insecticide into pristine eco systems is not big news in this country.  Indeed NO main stream news paper or TV station will touch this story without siding with the department of conservation and using its tired excuse that this poison is the best tool in the box – it isn’t.

“…We know that Monofluoroacetate was originally developed and marketed as an insecticide. It functions primarily by interfering with the citrate step in the Krebs cycle The Krebs cycle is the major and an essential mechanism by which all air breathing creatures utilize food to produce energy. It is therefore universally toxic to all animals, essentially every living thing except plants and some micro-organisms…”…

Dr Q Whiting-Okeef  is extremely well qualified to give such a statement.  This is a man who has looked into the science that has come from  DoC and Landcare and found it disturbingly incomplete and incompetent. Biased industry created reports - funded by industry.

…”…. The tendency of 1080 to poison non-target birds and mammals is recognised, but its effects on invertebrates have gone mostly unnoticed. At least 9 invertebrate orders are prone to 1080 poisoning. Invertebrates have been observed eating baits, and their habitats are contaminated by residues leaching from baits, and from animal by-products and carcasses. Poisoned insects provide a means of secondary poisoning for insectivores. Therefore, 1080 should not be used where susceptible invertebrate species or rare insectivores are found …..he concludes …… In the light of the evidence of the effect of 1080 on invertebrates, and the complex role that invertebrates play in the ecosystem, the unrestricted use of 1080 is likely to be disruptive to the environment, and where endangered invertebrate species are known to be present, 1080 should be used judiciously, if at all...."...

This of course has been ignored

However another study was undertaken in 1994 by Mike Meads on behalf of Landcare research NZ.  Meads was fired and had his name tarnished because his report countered what  DoC wanted to know.

….”……The insects associated with the breakdown of leaf-lilter were the most severely affected by 1080, which adsorbs to ceihilosic leaf-litter, and persists in the litter for at least 3 months. Although breakdown of 1080 can be complete at 30 days at 23~C, breakdown rates of 1080 at field temperatures in winter are much slower than at laboratory temperatures exceeding 201C. Mean maximum litter temperature during winter is 10.6~C and the mean minimum is 4.31C.

Comparison of the Whitediffs data with that of 2 other forests over 1 year, showed that :1080 had a severe impact on insect larvae (cc~leoptera~ hymenoptera, diptera and lepidoptera), collembola and araneida...."....

...."...that further investigation of the effects of aerial 1080 poisoning on invertebrate population is urgently required. In particular longer-term monitoring is necessary to determine not only which taxa are most susceptible to 1030, but also how long-lasting the effects are, and the likely ecological consequences...."....

">y">ou can hear him in his own words  her">e along with  Dr Q Whiting-Okeef  NOTE THIS CLIP HAS ALSO BEEN DISABLED IN THIS ARTICLE YOU CAN HOWEVER WATCH IT HERE BY PUTTING THIS IN YOUTBUE SEARCH Mike Meads - DoC's insect guy speaks out, before his death

Make no mistake – dropping a known insecticide into pristine eco systems on the pretence of saving the birds by killing rats is a form of Ecocide.  Many of our birds and bats eat insects – but even if they didn’t the life cycle of insects in the eco system is vital to the health of that eco system.

Every organic or perma-culture gardener knows that to maintain healthy crops whether that be vegetables or trees, the soil must be healthy.  Without soil health – without the insects of the forest floor a forest begins to die and that is what is happening in many of NZ forests.

The ‘collateral’ damage 1080 does to the forest floor alone is not worth the cost.  This one thing alone can be called ECOCIDE

We know kea eat 1080 and it won’t matter what colour it is – we know that kiwi’s eat insects .  We also know , because DoC told us, that dropping 1080 gives birds a window of 3- 6 months from predators - namely RATS - before they breed back faster than before.  Hardly seems worth it

Mice don’t seem to be attracted to it and Stotes don’t like it but die through secondary poisoning.  There are also concerns that rats will soon be immune to it as it is being dropped so prolifically. This was known to the commissioner for the environment Dr Jan Wright back in 2011 when there was a review.

And lets not forget that the reason there was a review was because there had been increasingly grave concerns.  Nearly a decade later those concerns are still present and still being ignored

In 2011 Author Bill Bensfield, now sadly deceased, writing in in The NZ Journal of Forestry had this to say

…”…. Although both DoC and AHB claim that insects are not affected by 1080, DoC actually has a registration for 1080 as an insecticide, i.e. P003660, issued 13/08/1992 for a 1%1080 wasp paste. Why the concern about insects? Well, insects can be by many times the greater part of the forest wildlife than animal and birds. It is likely that there would be around 60 to 80 kilograms per hectare of native worms. To that must be added the beetles, grubs, maggots, wasps, flies, cicadas, leaf eating stick insects, weta, centipedes and the wood borers which help break down forest litter as part of the soil making. As far as I am aware, no-one has sought to assess the biomass involved, but it must be considerable. Poisoning this mass of insects on a 3 year cycle will increasingly jeopardize the health of the whole forest…”….

Accompanying  that article is a picture of a large native bush worm found dead under 1080 bait at the Waianakarua Scenic Reserve in North Otago.  Bill ends with this timely waring

…..”……Although many benefits are claimed for 1080 as a conservation tool, rigorous analysis suggests some of these claims are flawed. If collateral damage to the wider ecosystems is also taken into account, then serious question need to be asked...”….

There seems to be a bullying culture within the walls of this industry ….”….Some DOC staff became afraid to speak out or take a strong line…”  Says Ex Doc Scienctis Nick Head

He’s not the only one

A toxic corporate culture to protect and ‘conserve’ its gravy train at the expensive of our pristine ecosystem.

Many are now standing up and speaking out, the time is now more than ever  for all good people within the industry to stand up and stand with all those calling for a stop to what can be rightly called ECOCIDE

….”….. Until we have a law to prosecute those who destroy the planet, corporations will never be called to account for their crimes…”…

I would like to thank all those eco warriors in this movement whose hearts and energy are doing the research and finding long lost science papers and gaining all the evidence we need to show the real facts,  and real truth,  and who are putting their bodies on the line to stop this ECOCIDE of our beautiful Wehnua while all around us the fake news brigade focus on their spin