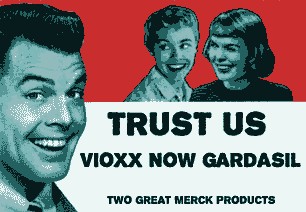 Know as Polysorbrate 80 or Tween 80 it is a food additive that enables solubility of flavoring oils with water and is used widely - however few know the effects of this chemical when injected directly into the body.

“Polysorbate 80 injected into prepubescent rats caused a rapid growth of reproductive organs, but growth was abnormal and the rats were sterile, unable to have children. When used intravenously with vitamins it has been known to cause anaphylactic shock. According to the Polysorbate 80 MSDS, it may be a carcinogenic, (cause cancer), as well as a mutagenic, (birth defects).”

Given that the recent reactions to the melamine contaminated milk scandal which caused 4 infants to die and thousands more to be in severe pain with kidney stones – allowing a vaccination which has already killed 21 young women and seriously affected thousands more to remain on the market is shocking.

“Merck's case studies for the HPV vaccine (paid for by Merck) included only 1200 test subjects under the age of 16, and the drug was only tested for an average of 18 months. This is not nearly enough time to test for the long-term side effects of a vaccine that will be used on young girls just entering adolescence.

The Gardasil vaccine contains Polysorbate 80 (also known as Tween 80), a known carcinogen. In addition, this ingredient has been shown to have estrogenic alterative effects and cause reproductive disturbances in rats:

Previous studies…have shown that Polysorbate 80 administered by intraperitoneal injection to neonatal female rats on days 4-7 after birth produced estrogenic effects including earlier vaginal opening, prolongation of the estrus cycle and persistent vaginal estrus. Some of these effects were evident many weeks after cessation of administration of Polysorbate 80 [Gajdova et al. Food Chem Toxicol 31(3):183-90 (1993)].

We don't know what those estrogenic effects would be on the developing bodies of pre-adolescent girls. The statistics being reported to the Vaccine Adverse Effect Response System (VAEECS) are already troubling:

"Because Merck only studied Gardasil in fewer than 1200 girls under age 16 in prelicensure trials, it is critical that doctors and parents be made aware of the nature of the initial adverse event reports coming into VAERS and that they report serious health problems after vaccination when they occur," said NVIC President Barbara Loe Fisher. "There are twice as many children collapsing after getting a Gardasil vaccination compared to those getting a Tdap (tetanus-diphtheria-acellular pertussis) vaccination. There have been reports of facial paralysis and Guillain-Barre Syndrome. And doctors who give Gardasil in combination with other vaccines are basically conducting an experiment on their young patients because Merck has not published any safety data for simultaneous vaccination with any vaccine except hepatitis B vaccine"

“In the same section of toxicological information it states that it may cause reproductive effects, it may cause cancer, and may be a mutagenic, (change the genetics), in animals but this is followed up with the statement, no human data found. Well, unless they use people as lab rats, they won't find this data until it is used on humans to an extent to present this data.

According to PubMed.Gov a service of the U.S. Library of Medicine and the National Institute of Health, a report shows that neonatal rats were injected with small doses of polysorbate 80 and the results were major effects on the reproductive organs of the rats, resulting in infertility. (see the PubMed link below). Considering this is a component of the Gardasil HPV vaccine, (not to mention other vaccines), and they are recommending this to girls at prepubescent ages, there should be some concern to any parent that this could possibly lead to infertility in your child.
As this vaccine has been made mandatory of on young girls in the US its interesting to note that early on in the piece politicians are address issues of liability

An early version of the Virginia house bill contained a clause addressing liability issues "if a female who is inoculated with the HPV vaccine becomes incapable of naturally conceiving a healthy child carried to live birth or experiences impaired fertility as a result of the HPV vaccine".

"Since June 2006, when the HPV vaccine Gardasil was approved by the Food and Drug Administration, there have been 28 reported cases in which pregnant women miscarried after receiving the vaccine".

There are NO long term studies done on the damage this vaccination could do to young women's reproductive health – none. This is alarming – our young women are in essence guinea pigs for this new vaccination

see the Gardisal ingredient list (at bottom of document) here

“In January 2008, Channel 7 analyzed TGA data from a FOI request which showed 681 adverse reactions with 162 girls and women not recovered. Girls between 14 and 17 had not recovered for an average of 165 days. On July 4, 2008, the TGA published new figures of just over 1,000 adverse reactions to-date that had been reported. But they did not release in depth details of what these reactions were and, importantly, whether or not the girls and women had recovered.”

In a similar article

“Dr Das and his colleagues said an extensive investigation could find no other cause for the pancreatitis and while a coincidental illness could not be ruled out, "neither can HPV vaccination be excluded as a potential cause".

In 2007 when Gardasil was first administerd to young girls in Australia ...

There is no follow up on these girls to determine their current state of health given that thousands of girls in the US are still unwell with symptoms of fatigue, incredible headaches, paralysis, stinging eyes and consistent vomiting - most doctors and practise nurses continually refuse to see a link

In another alarming article – American writer Cynthia A. Janak concerned at the alarming numbers of healthy young girls dying and experiencing deliberating illness has uncovered some research that suggests to her  that given the ingredients within the Gardasil vaccination - that this vaccination NOT be given to any girl with a family history of allergies

“Do you know how it is when you have a gut feeling that just won't quit? It is like the itch you just cannot scratch that gets worse with time. It is very annoying. Well, I was finally able to scratch that itch and all my efforts have finally paid off…… I have been researching Polysorbate 80 for some time now because I had a gut feeling that there is something to this chemical. I have been doing the same for Histidine because Gardasil is the first vaccine that is using this chemical. I knew that the addition of Histidine had something to do with what we are seeing with Gardasil. Here are my findings.