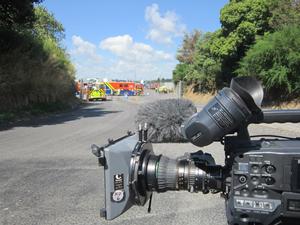 
Born and bred in Taranaki, I have a passion for local news and sports.

I am a reporter for Radio Live based in New Plymouth providing local news and sport for the network.
The stories I source for them I upload on InfoNews creating local exposure for the district and province.

If you would like to get in touch, please send me an email wjohnston@mediaworks.co.nz

Over 1000 people are without power in South Taranaki as strong winds batter the region.

TARANAKI — Parts of Taranaki are without power this evening after strong winds have battered the region.

NEW PLYMOUTH — One person has been shot dead during an Armed Offenders Squad this morning.

TARANAKI — The TSB Community Trust has granted $4.5million to the Taranaki District Health Board.

NEW PLYMOUTH — Smoke alarms have saved the lives of a family of 5 after a house fire in New Plymouth this morning.  4 fire appliances were called to a Vivian Street property to find it fully involved shortly after 3 this morning.

NEW PLYMOUTH — Two houses on the outskirts of New Plymouth have been damaged by a tornado.

AUCKLAND — Up to 60 firefighter and 15 fire trucks were used to control a massive fire in the Auckland suburb Westmere tonight.

Auckland firefighters are battling a large fire in the suburb of Westmere and three people are unnaccounted for.  15 fire trucks, including ariel and ladder units and up to 60 firefighters were called the the scene shortly before 8:30 this evening where 3 houses are alight.

NEW PLYMOUTH — The controversial Len Lye Centre has been given the go-ahead after a meeting in New Plymouth last night.

TARANAKI — Fire crews were kept busy after a blaze tore through a sawmill on the outskirts of New Plymouth last night.

TARANAKI — A sawmill has been on fire this evening in New Plymouth.

TARANAKI — The five students from a Taranaki school who suffered from smoke inhalation after a fire yesterday are now back in the classroom.

TARANAKI — Six students have been taken to hospital after suffering from smoke inhalation in a fire in New Plymouth this afternoon.

TARANAKI — Driversions are still in place after a truck carrying LPG bottles crashed north of Urenui this morning.